….. Through a melánge of Wine , Beautiful people , 42 hours without sleep and fond farewells the blog became collateral damage .

This will be part 1 as the pics that ended up on SO many phones I’ve not got yet.

She told us she was going ahead – Now I find out where the lovely Heather ended up on her adventures yesterday. Another stunning narrative from her but this time with Pulitzer standard colour & B&W photos.

I guess y’all are getting another “dear diary” post already because yesterday is a story all its own and one I needed to put into words before I forgot any of the small details. It’s a real long one, so just look at the pictures if you prefer. 🤓

After one of my more diversely emotional days thus far, a desire for a stint of solitude with my own thoughts coupled with a strength I haven’t quite felt until now led to a roughly 50 kilometer (30 mile) day that began with the sound of rocky footsteps just before sunrise and ended with even swifter steps as the pink sunset turned black a bit sooner than I’d expected, without civilization for miles. Around midday yesterday, I began feeling a strong desire for a bigger challenge, one farther outside of my comfort zone; I realized that I hadn’t yet felt uncomfortable enough or challenged in a way that feels necessary to my personal growth experience. With that, I departed from the people who have become a lovely and warm camino family for a couple of solo days on the road. I set out for a village another 20 or so kilometers away as there were beds still available and an eclectic sounding bar that I had read about earlier in the day.

When I finally arrived just after 9pm, with very little energy and an 11pm curfew looming, it took everything in me to trek up to the bar. I was eager for a new experience on my own, though, so I set out. The entire dormitory room of eight beds was empty, something absolutely unheard of thus far, so the albergue owner gave me a key to the front door, seemingly unconcerned with the curfew restriction–also quite unheard of.

I peered into the bar, nicknamed “Bar Elvis”, before committing to the idea, as it appeared to be completely empty. It turns out, though, that was the best part about it. I walked in to see the bar owner, Eusignio, behind the bar smoking a cigarette, sipping brandy, singing, dancing and smiling all at once. I quickly realized I was in for some sort of a treat. His energy was through the roof, his joy was infectious and he spoke Spanish a mile a minute–seemingly unconcerned with what amount I was comprehending (for the record, thanks to the help of body language and hand gestures, I’d say 60% is a good but generous estimate).

From the minute I walked in, he was welcoming, generous, hilarious and full of joy that I have to assume he explodes with the same way each day. He poured us both a glass of brandy from his top shelf, warming the glasses to increase the aroma as he insisted on me smelling it before sipping it. It tasted/felt precisely how I imagine the fire of Khaleesi’s dragons (also RIP ice dragon) would feel going down my throat and engulfing my esophagus. Out of shelves and cabinets all across the bar, he began placing plates of chips, olives, cheese and meat in front of me, generously offering me a little of everything.

I’ve always been extremely cautious and particular with food while traveling, so when he began scraping unidentifiable fish from a disposable plastic package (that I was initially certain was for the four cats peering in from each window and door), I immediately began thinking of how I could communicate a fish allergy in broken Spanish. But something in me just couldn’t deny the hospitality and generosity of this man who seemed to have so little but without question was giving so much (I later found out he lives behind the bar, in an area connected by a sort of tunnel).

We shared our 11pm dinner together as he took breaks to turn on the ancient laser light machine that was tucked behind the even more ancient CD player that blasted an eclectic mix of music to which he knew every word to every song in every language, even though I know his actual comprehension of English is about +/-10 words. And, from what I could gather, half of those words are “The Way”, “Martin Sheen” and “Apocalypse Now” and are a result of his bar’s cameo in the camino film, “The Way”, which you can tell from the moment you walk in the door is the pride of his life. Playing on loop in the corner, every minute of every day, he fast forwards with precise accuracy to view his half second of stardom whenever the opportunity to do so arises, and he lights up the most when recounting every detail of the experience. It has been seven years since the film was released, even more since it was shot, but I can’t imagine his joy being any brighter in the midst of those moments than it was yesterday and surely will continue to be indefinitely.

After too much wine and surely too much brandy, I said goodnight and asked if the bar would be open for breakfast so I could come and hang a bit before getting on the road again. He told me he wouldn’t be opening until 10, so I would probably miss him so I said goodbye and thanked him for his kindness.

I decided to take my time getting on the road this morning, starting my way out of town with one more trek in front of the bar so I could get a daytime photo of the exterior. Much to my delight, the front door was wide open. I ran in to a similar delight behind the bar. He told me he decided to start the day a little earlier today and I was so happy that he did.

He made me a coffee and insisted I grab fruit and pasties for the road. I sat with him for awhile as he took his morning pills, cleaned the bar from the night before and sang, danced, laughed, drank and smoked exactly as he had nine hours prior. We took a few photos and he sent me on my way with a hug, a kiss on both cheeks, spoiled grapes, a delicious (and fresh!) pear and a cafe con leche prepared with questionably room temperature milk that I enjoyed all the same.

I walked out of the village of Reliegos with the truest smile on my face and the most happiness in my heart. Minutes later and out of nowhere, I began crying for the first time since beginning my camino. There was no sadness behind any one tear, though; only a deep and honest gratefulness for the life I have been given and the people who walk in and out of it every day. x

Friday – 22nd – i approach 500k – this was to be last full day on the Camino for me this year – and as agreed unspoken as it’s a real wrench to even think about leaving these amazing , positive , sharing , strong , vulnerable , focused , funny , skilled , learning , teaching , emotionally intelligent people 💞. Bruised by – and before – the Camino.

We are travelling from ……

What better than early trivia to distract ? As we pass through Villarente I came across the 1985 car of my youth – Ford Escort XR3i – perfect condition as no salt on roads out here – left a note !! 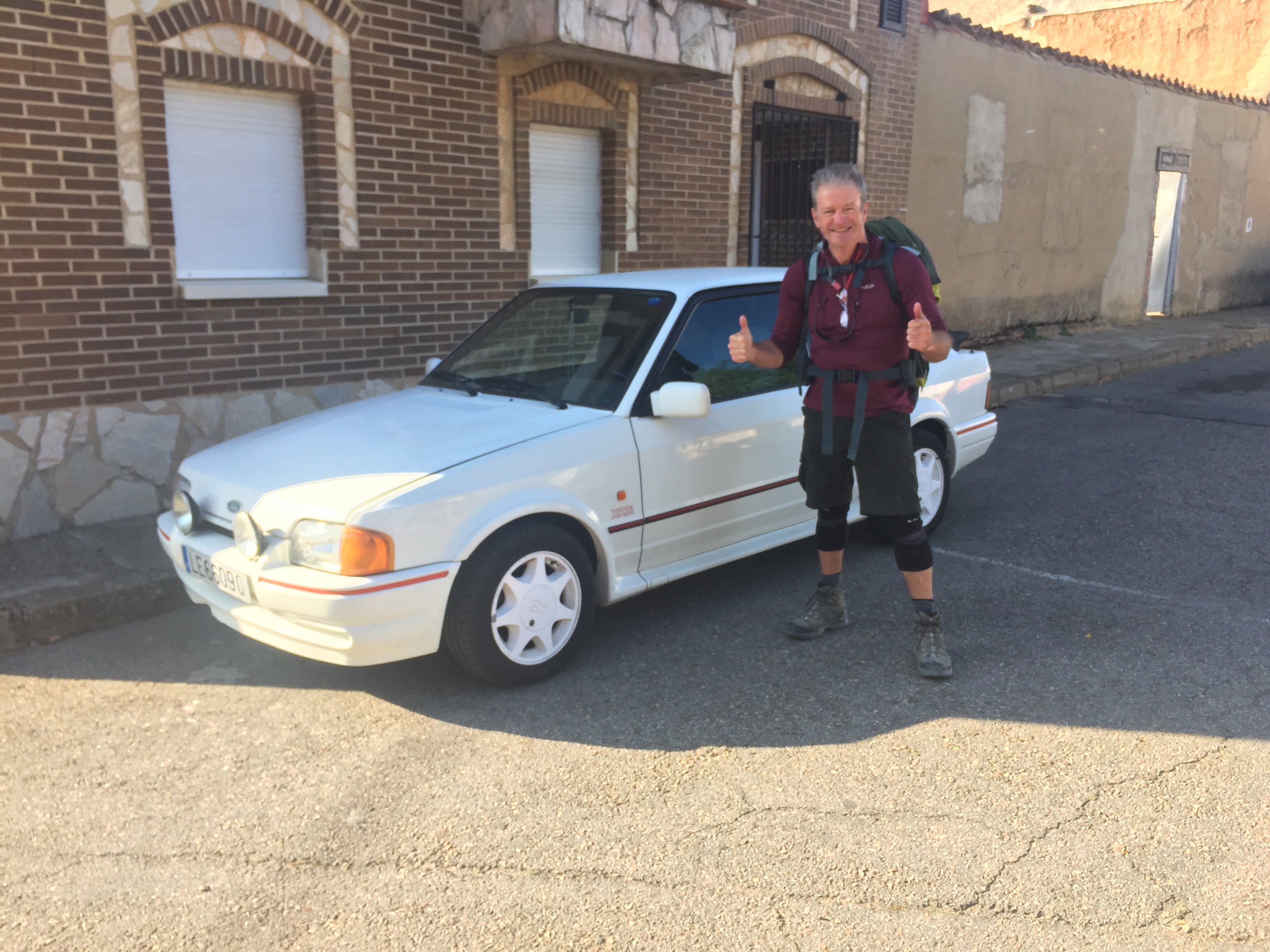 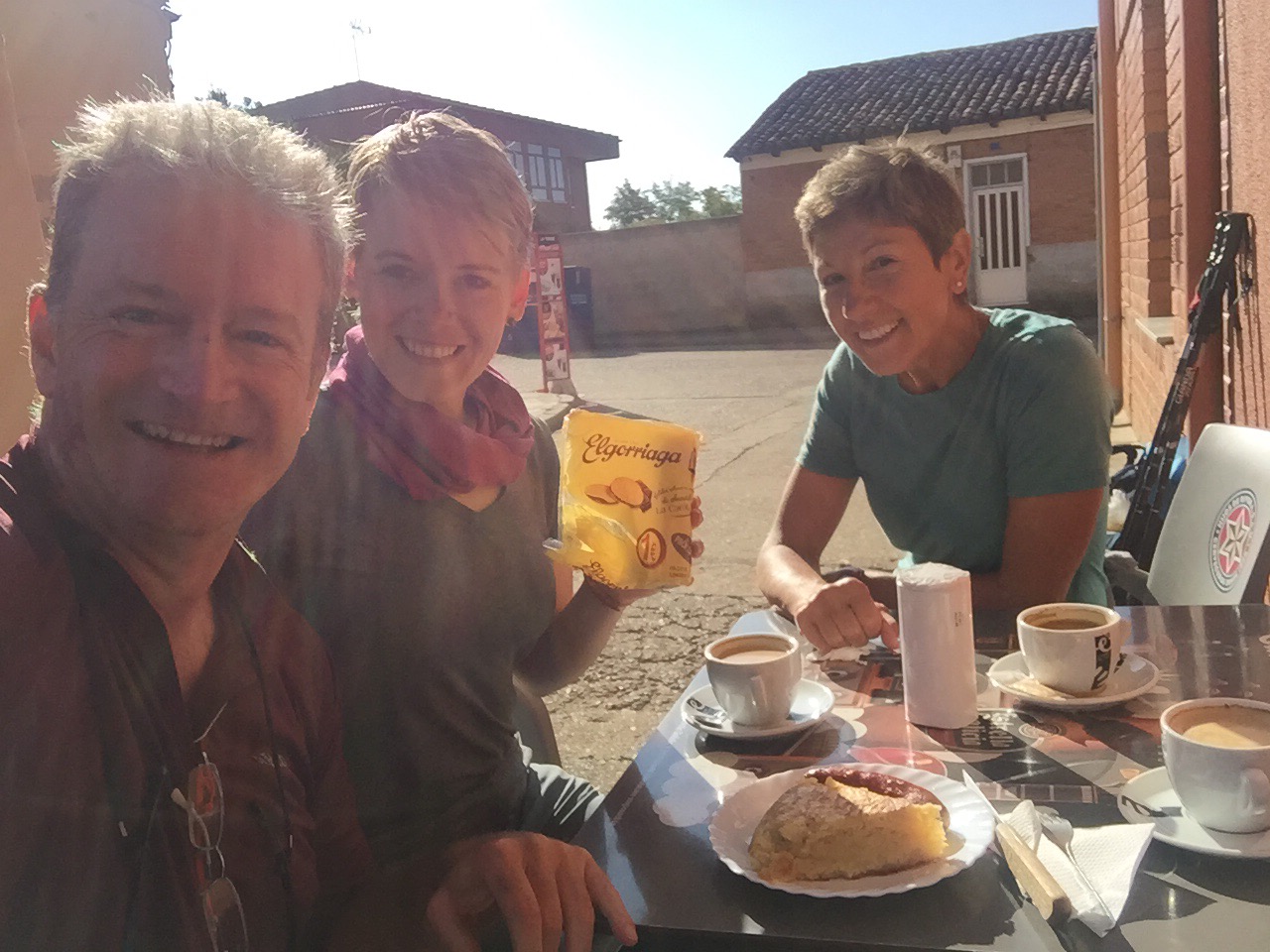 We approach the outskirts of León and some very kind guides posted for Pelegrínos state their are 46 palaces and castles in León – and they come thick and fast – would love to spend more time here. 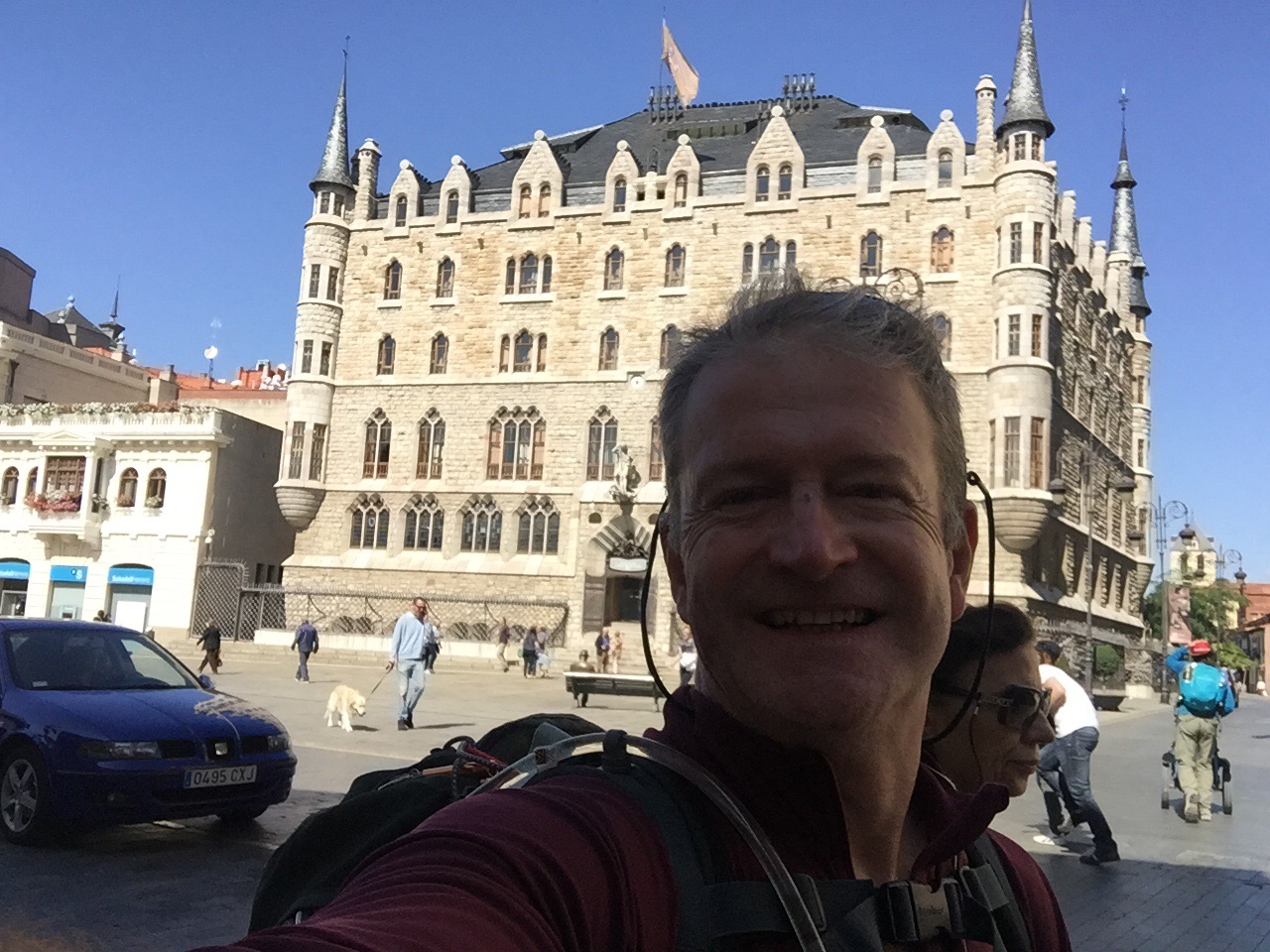 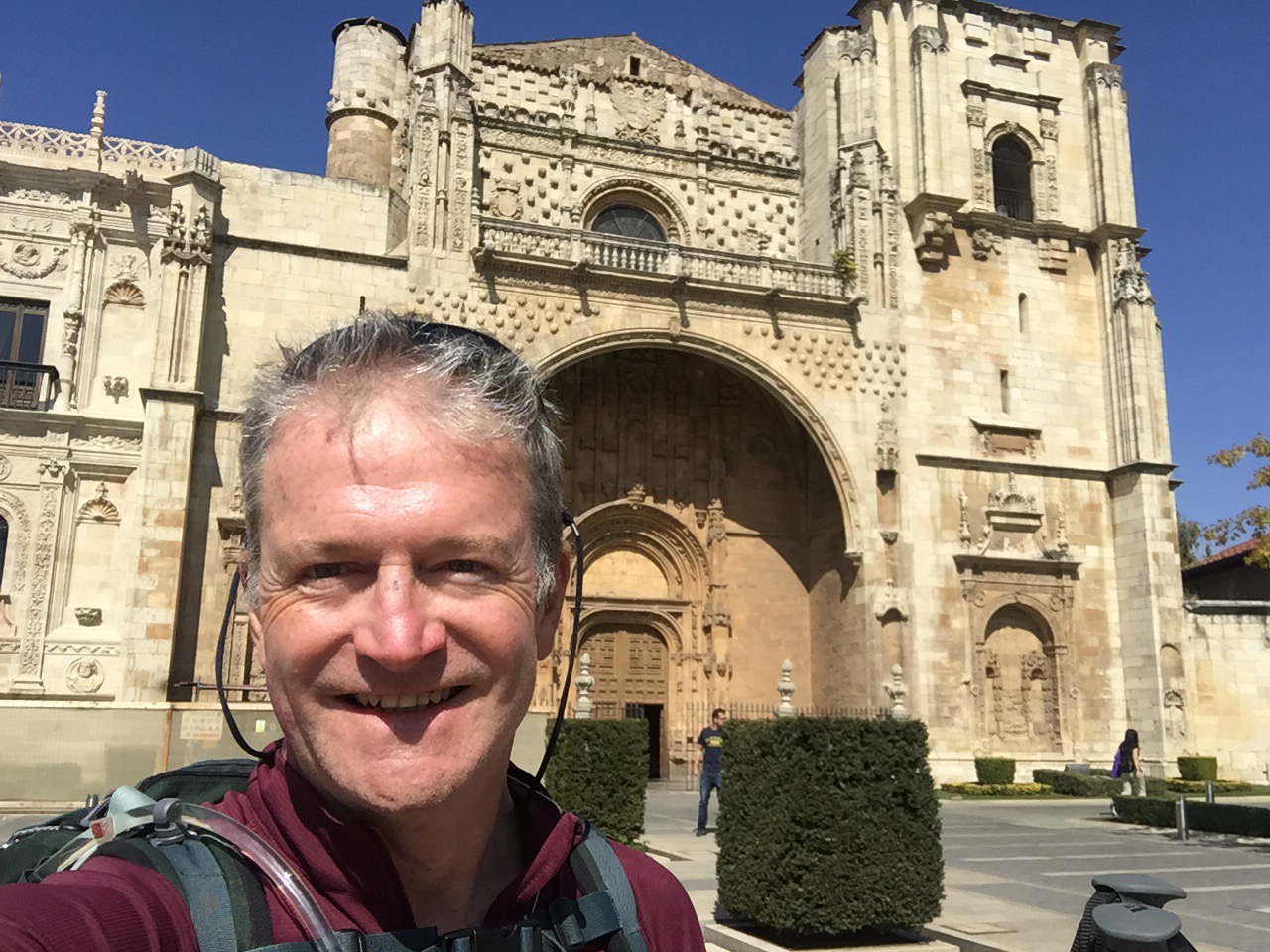 Attracted by the same model I drive at home – we wonder what’s through the door . 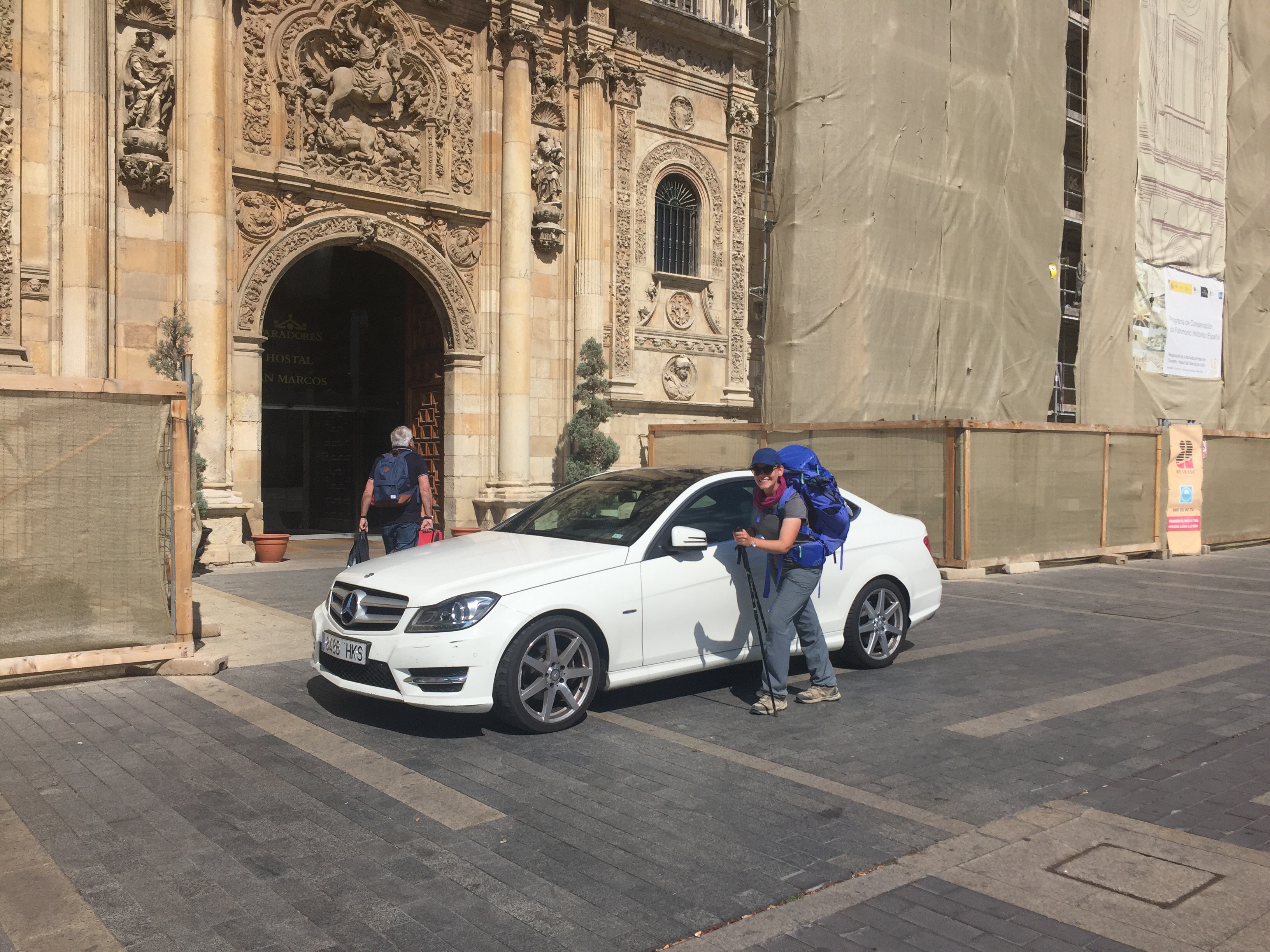 It’s an Albergue ! – The Pelegrínos experience and care for weary travellers appears to be improving as we travel on 😜 ……..

There’s a place to store your boots – as usual ……. 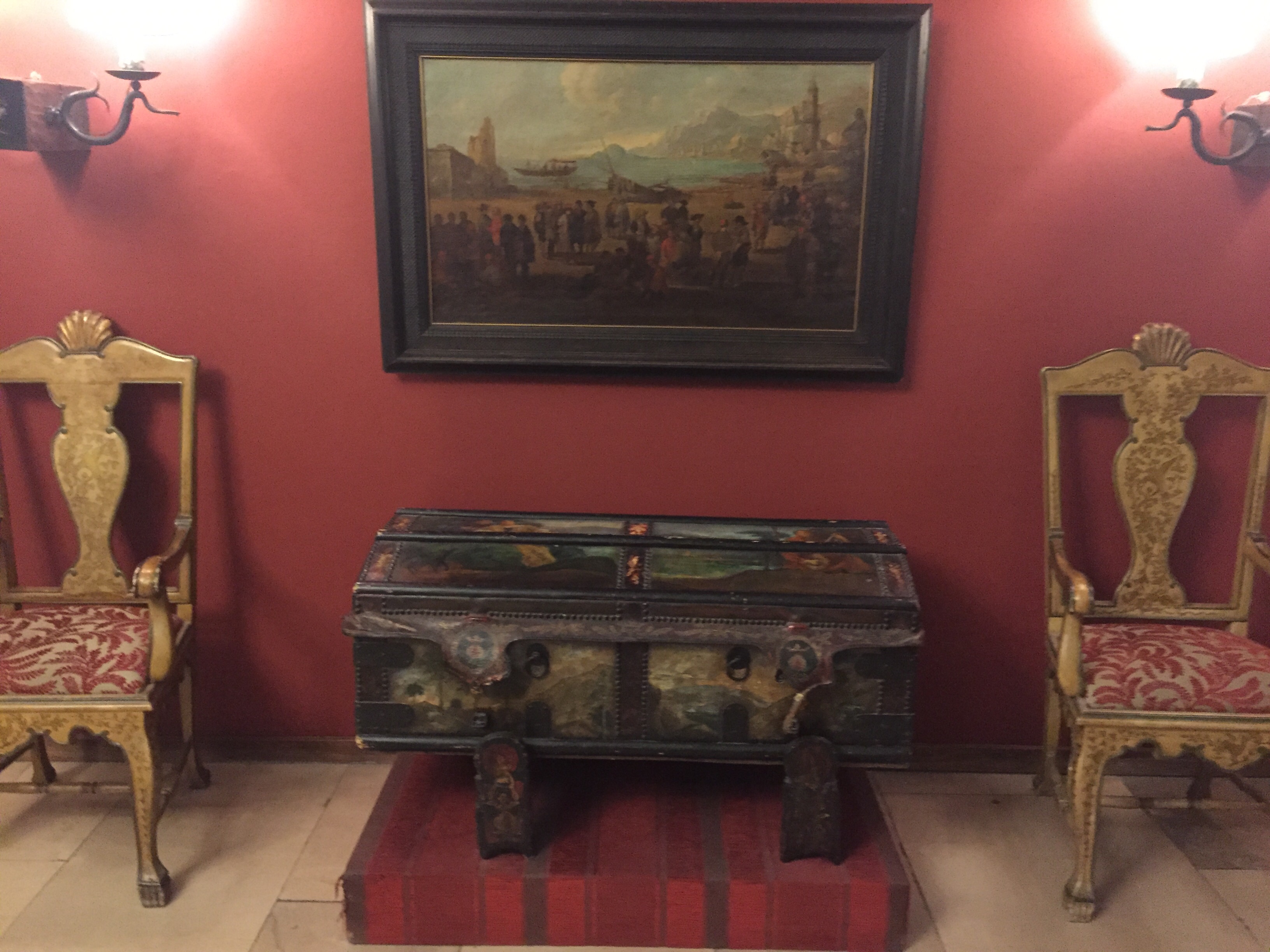 And the garden that has been a feature of many previous stops has religious connections at this Hostal with its cloisters. 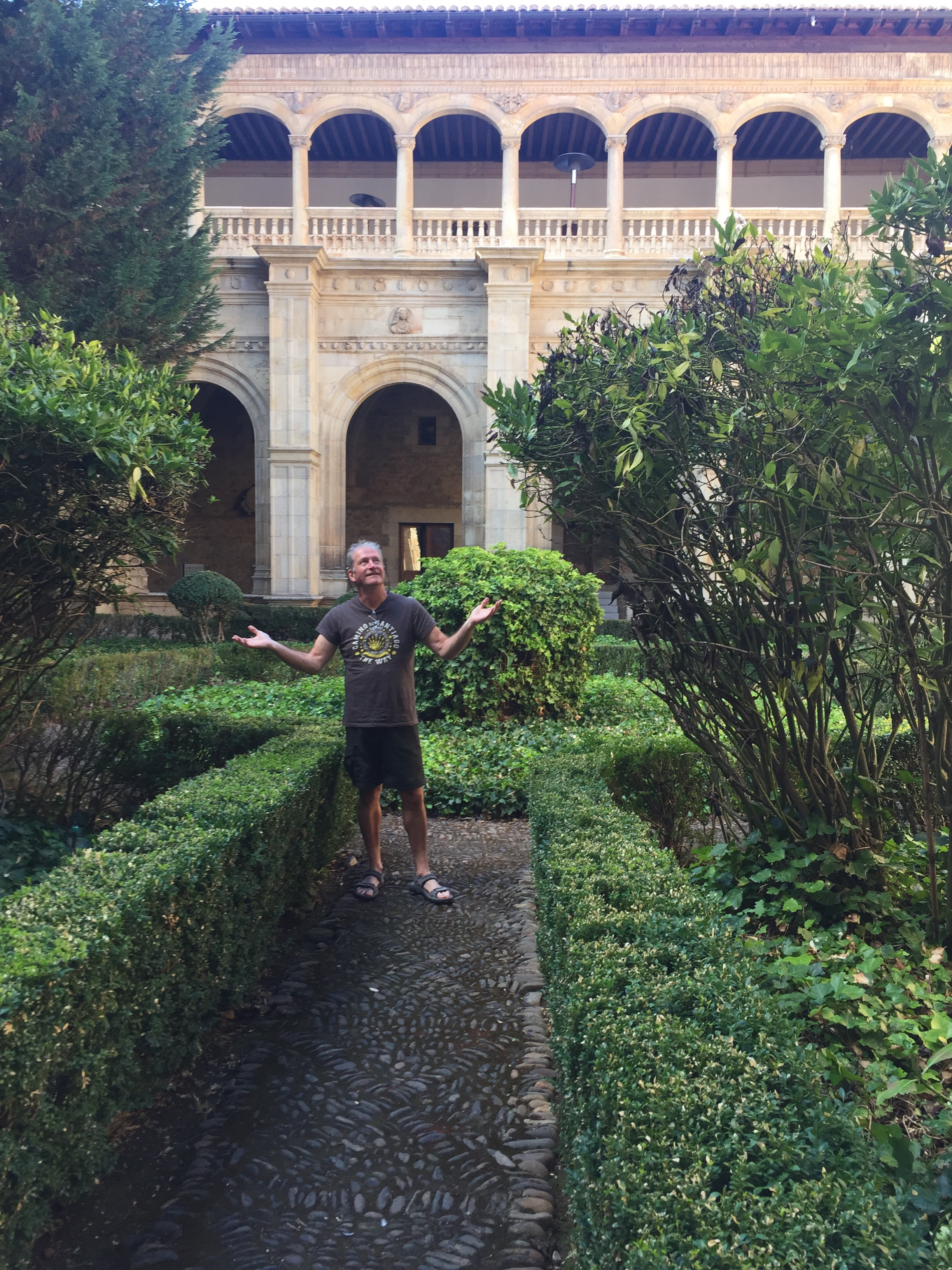 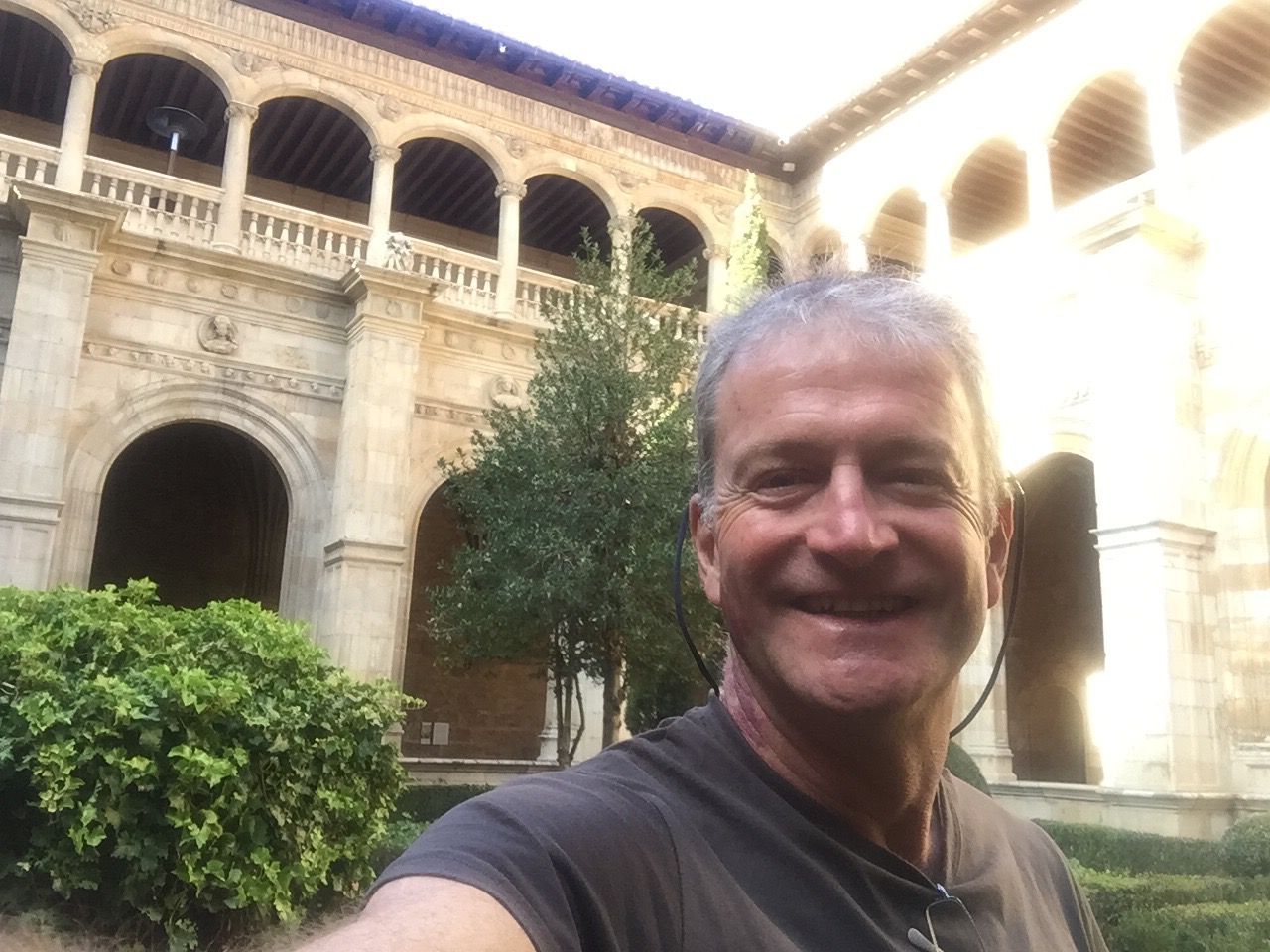 Carmen looking at home – she deserves it 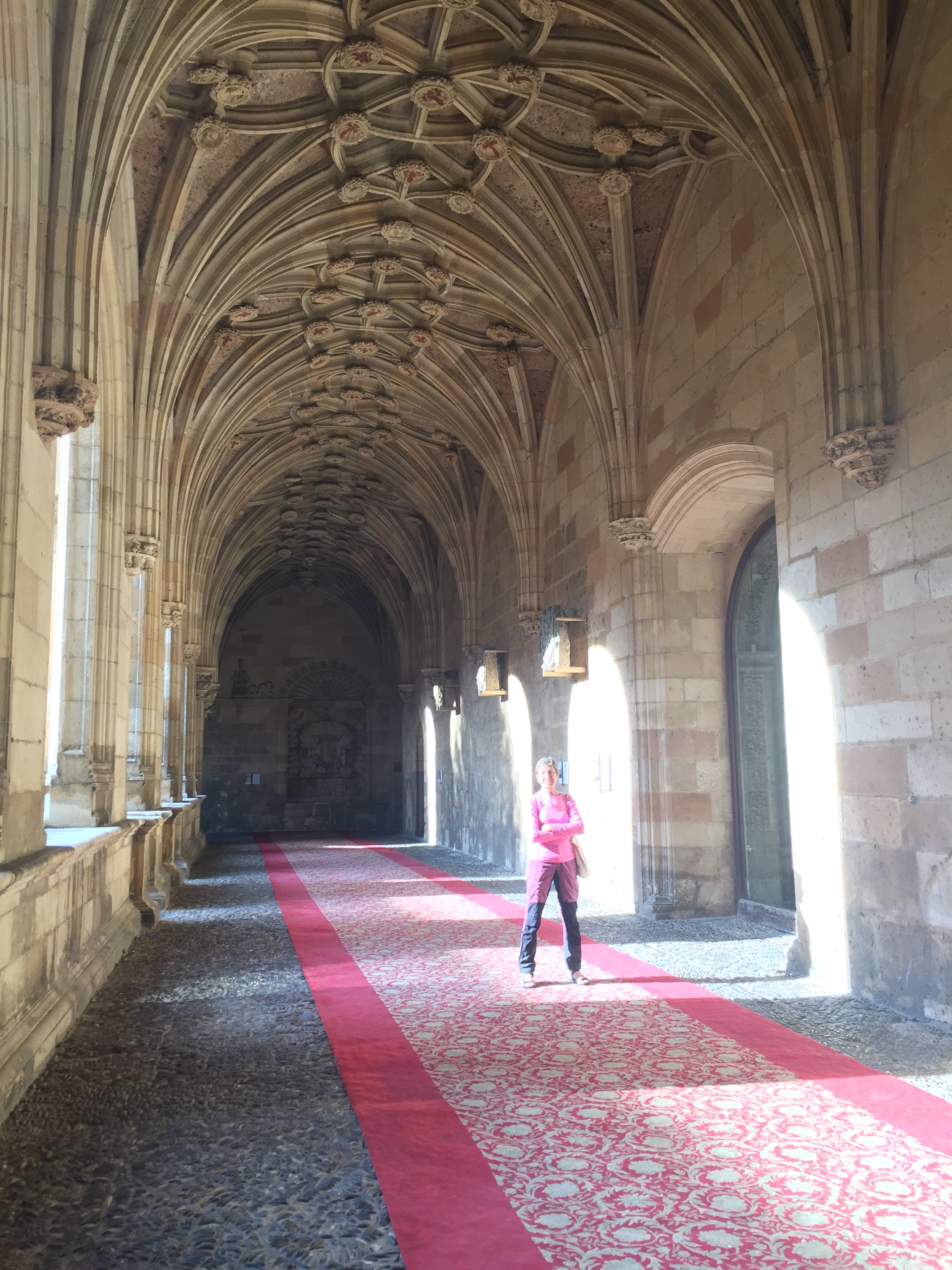 Escaping into León – the town is warming up into an incredibly vibrant Friday night of crowds , cafe culture , late restaurants …….. but I’m on the clock – I leave just after Midnight on the bus to Madrid – Barajas Aeropuerte