Monastery Saba Daishi – Contains one of tbe 20 additional temples . When you spend time with the Abbot of a Buddhist Monastery – 12 hours of meals , the 6.00pm end of day fire ceremony and the 5.30am dawn prayers you start to get a feel for the place and what it takes to maintain.

No photos allowed during the service , you’d just miss the whole point clicking away 👎 – I was given some of these Later for my journal . He also allowed me into the tunnel again as we spoke & interacted quite often . Possibly because this Monastery will sleep up to 150 visitors and priests – but tonight the total overnight guests were …….. 2 !

After 2 rewrites to make this next paragraph sound less Lara Croft and failing …..

Walls lined with 100 000 tiny Jesü figures , golden lotus stepping stones , a bright corridor , leading to a dark , descending tunnel with mini shrines you pray to every metre , only step on the lotus stones – nowhere else , it goes straight for 100’s of metres , curving at the end as it opened out into the curved saucer shaped temple .

See what I mean ? 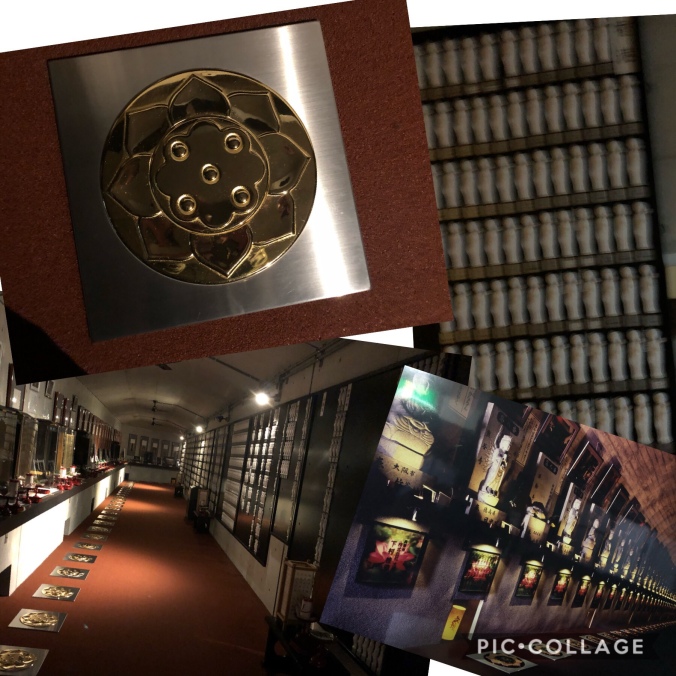 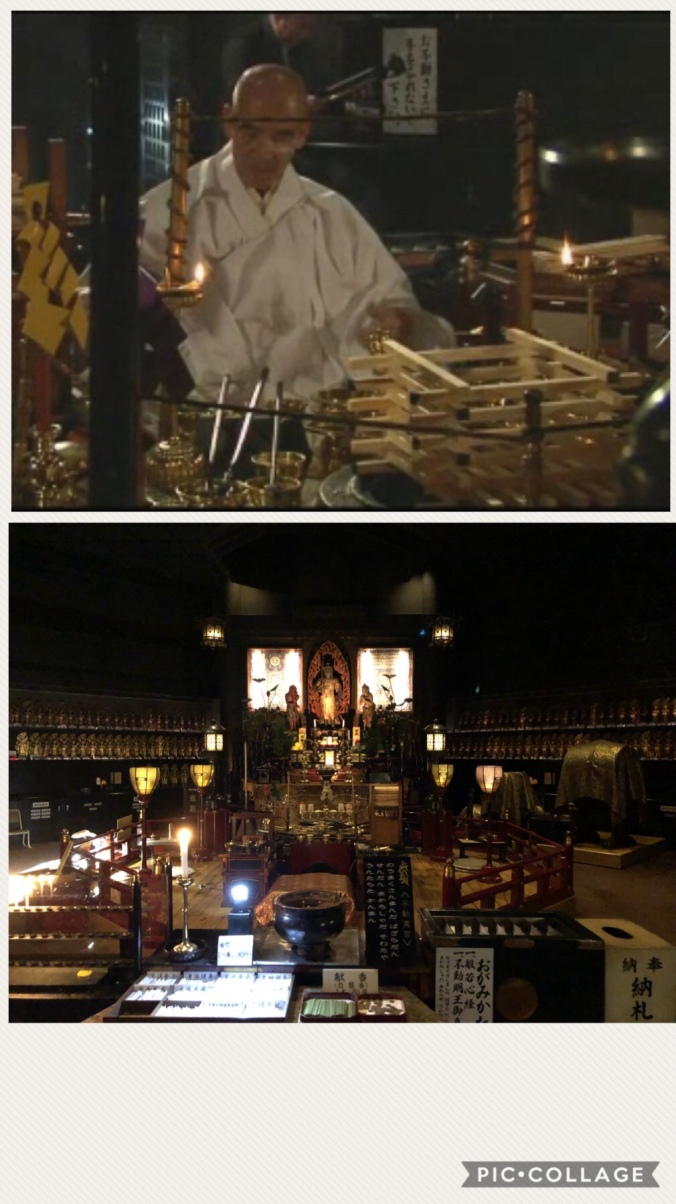 Baffled , Awed , shocked – we were in the perfect state to follow the deep tones , rattling relics and bells of the Abbots mantra and prayers .

He set fire to Kilos of Incense , smoke fills the temple , deep intonations start and only then does he light the fire with sticks made of messages , pleas for Luck , Health , Children , Family – you name it .

By now you can’t see a thing except for the huge fires hazy glow and hear the mesmeric chant .

Only now – in part due to the tiredness of the hike – it’s partly the intended way pilgrimages work – you feel the trancelike state too.

Wow ….. the Theatre of Religion – Honed over thousands of years .

Open your mind and it’ll get you every time !

We leave that morning and we start to see new things as we come down from the hills to reach the coast – my first view of the Pacific Ocean . 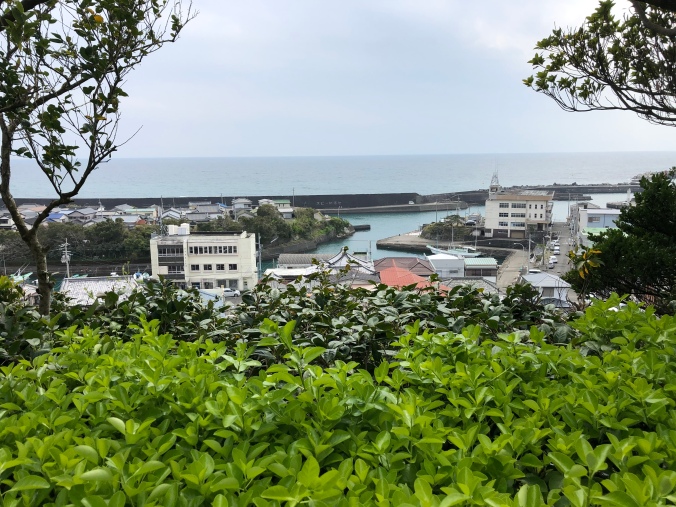 And ……. Signs that say we are at risk of tsunami ! 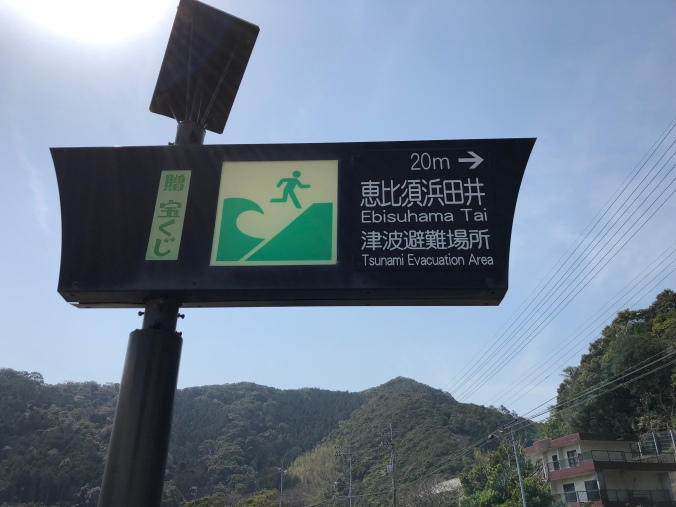 Leading to these strange towers ……

At first I thought they were steelwork for new buildings – but no – in an almost disaster movie scenario- this where the entire village will run to when the wave is about to strike . Chilling – there’s not enough room .

The climate is now tropical , the villages all centred around fishing . The harbours ( even the little ones ) with 5 storey high new concrete sea defences . The walls dwarfing the villages . We decided to check – Kate’s Japanese is good enough – the communities have been told by the Government that there is a 100% chance of a tidal wave in the next 30 years – hence the vast defence preparation . I don’t see that as a useful timeframe as it means ANYTIME really.

But for now a pregnant calm cloaks all these villages , silent streets , little obvious activity, the sea flat , the temperature and humidity high. 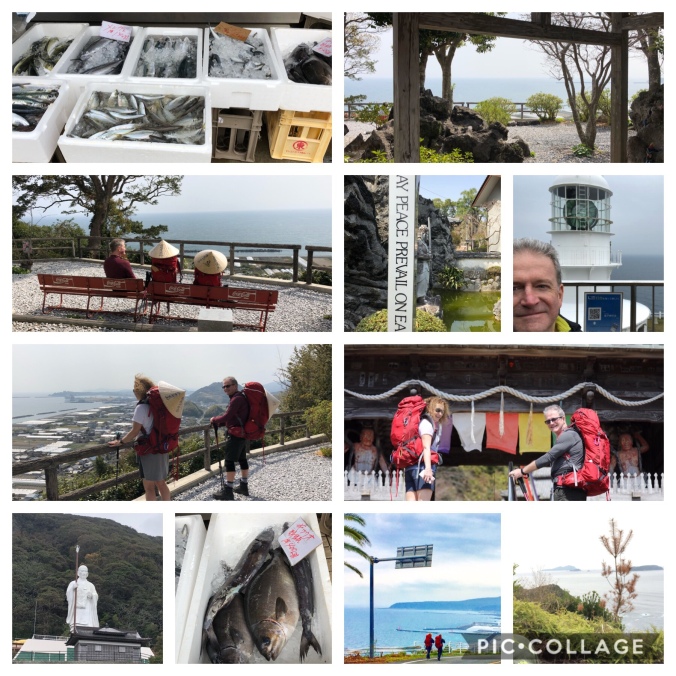 My favourite temple is here – Number 32 . Not the most ornate , nor the wealthiest – calm and friendly a thousand feet above the potential inundation below . 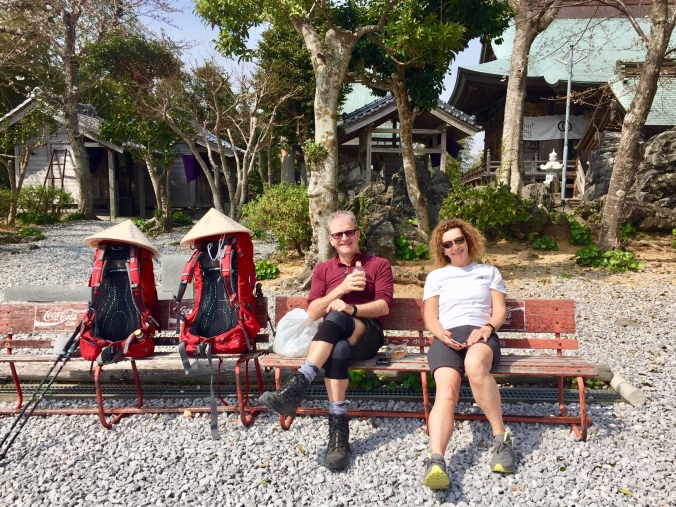 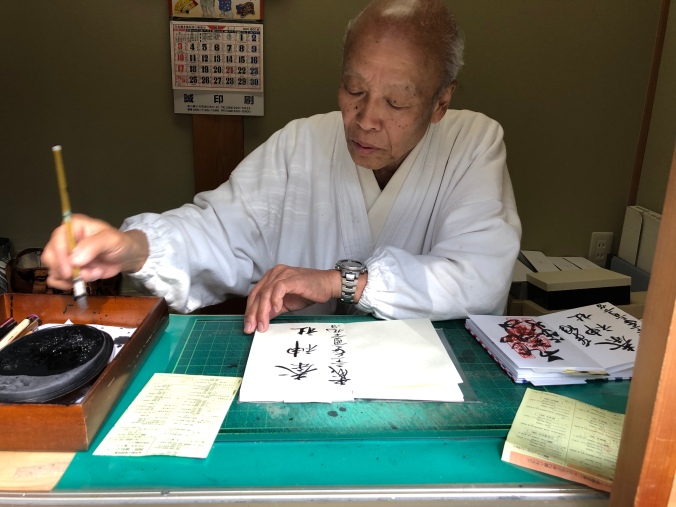 The charming priest of a nearby Shinto Shrine breaks off from his gardening to create another gorgeous entry in our books.

Heading for the mountains now …. until then xxxxx

2 thoughts on “The Real Deal & The Pacific”